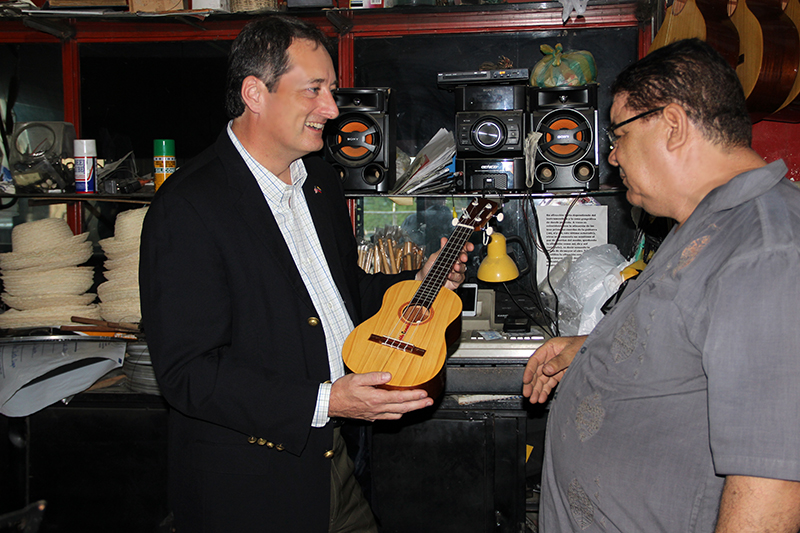 Lee McClenny, Head of Mission of the Embassy of the United States visited the State of Lara to strengthen ties with leaders of political, business, academic and sporting sectors, as well as community and cultural leaders of the state to further strengthen the existing bilateral relations between the United States and Venezuela, especially in this beautiful region of Lara.

Mr. McClenny has taken his message of goodwill of the American people to other regions of the country, since he began his stay in Venezuela.

The Chief of Mission of the Embassy of the United States, Lee McClenny, wanted to see first-hand, the origin of the musical instrument that identifies Venezuela: the cuatro!  To do this, he made a stop at the renowned workshop of Pablo Canela, where his son, Ivan José designs and manufactures the instruments in addition to teaching young people the art of playing the larenses cuatro.

But his musical knowledge has no limits, and he explained the origin of the typical Venezuelan musical instrument to Mr. McClenny, and also played a short section on mandolin and even the ukulele – the characteristic instrument Hawaii.

The young and triumphant members of the Little League Baseball Cardinals of Lara showed the Head of Mission of the Embassy of the United States how they play the great game of baseball.  Mr. McClenny fulfilled his promise to the children during the Little League World Series in Williamsport, Pennsylvania (USA), that he would come to Barquisimeto to visit them at home, once they return victorious from the World Series, where Venezuela came in third.

Mr. Lee McClenny conducted a courtesy visit to Venezuela’s oldest newspaper, El Impulso, which for over 100 years has reported and served the Lara region with pride.

Monument of the Sun for the World

To conclude his visit, Mr. McClenny wanted to take a photo at the iconic Monument del Sol in Barquisimeto with the desire to return to the city of the sunsets as soon as possible.