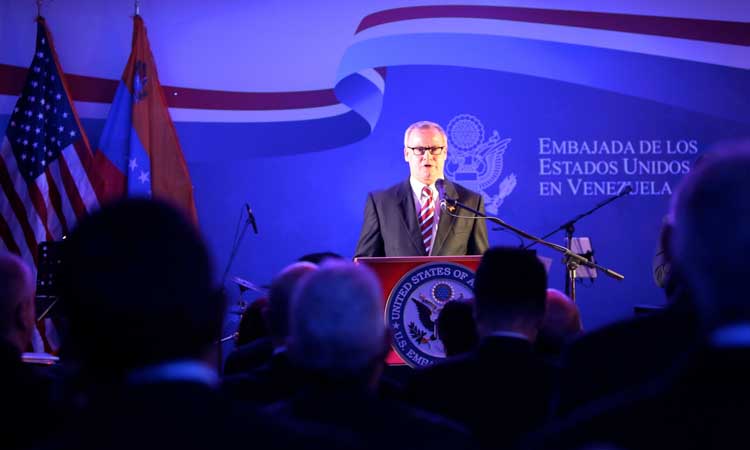 Good evening. Members of the government of the Bolivarian Republic of Venezuela, honorable ambassadors and members of the diplomatic corps, friends and partners, ladies and gentlemen. Thank you all for being here with us tonight to celebrate the anniversary of the Declaration of Independence of the United States of America.

I would like to begin by conveying the warm regards to all of you from Todd Robinson, our former Chargé d’Affaires, and Brian Naranjo, our former Deputy Chief of Mission.  As you know, both were expelled from the country on May 23 of this year.

We are fully open for business, and our work at the U.S. Embassy continues.  Every day, we are working to build on the strong ties between the people of the United States and the people of Venezuela, through cultural exchanges, commerce and education, and so much more.  We continue to meet with Venezuelans from all sectors of society and listen to a wide variety of opinions and views, as is our duty as representatives of a diverse, free, and democratic country.  We continue to speak out for the restoration of democracy and for conditions that will permit a return to economic prosperity with the help of a robust and socially responsible private sector.

We are here this evening to celebrate the Independence Day — July 4, 1776.  U.S. democracy, like all democracies, is a work in progress. However, the building of our democracy was neither fast nor easy, nor is it yet complete.

When the founders of my country drafted the U.S. Constitution, they wrote, “We the People of the United States, in order to form a more perfect Union…” Their goal was not to form a perfect union immediately; rather a Union that, over the generations, can reach its own type of perfection.  The founders knew that subsequent generations would face many challenges.  Nearly two hundred fifty years later, we are still striving to achieve that goal.

During the Civil Rights movement of the 1960s, brave Americans from all sectors of society joined together to peacefully protest for racial equality and social justice.  Dr. Martin Luther King, Jr. called for peaceful and participatory

activism, saying, “Our lives begin to end the day we become silent about the things that matter.”

In the United States today, people continue to strive for that “more perfect union” that our founders described. Just over the past year, the world witnessed people across the United States openly debating and publicly demonstrating about abuse of power, gun laws, racism, women’s rights, social inclusion, and immigration policies.

Every day the people of the United States freely express their opinions and work to make our country better.  We do not hide from the realities we face.  Our government respects our constitution and our laws. The courts are independent from political pressures. The government does not attempt to silence our voices.

As U.S. citizens, we have the duty and the obligation to represent and defend the rights and values established by our constitution, those of democracy and the freedom of expression.  We share these same values with the people of Venezuela, as enshrined in your constitution.  Venezuelans and people from the United State of America alike should have the right to speak out and to criticize our governments without fear of persecution.

We have the right to live, study, and work in the country of our birth without being forced to emigrate in order to survive.

We have the right to vote in free and fair elections.  The May 20 elections didn’t allow Venezuelans to exercise that right.  The United States joins democratic countries throughout the world, in denouncing the unjust election process.

The United States joins democracies around the world in calling for the restoration of Venezuelans’ constitutional rights.  Again, we call for the restoration of the National Assembly’s constitutional powers.  We call for free and fair presidential elections.  The United States continues to call on the Venezuelan Government to free all political prisoners unconditionally.

We call for the opening of a humanitarian channel to address the Venezuelan crisis.  To state the obvious: It is the misguided policies of the Venezuelan government — not sanctions levied by the international community –that have destroyed Venezuela’s prosperity. We call for an end to restrictions on legitimate economic and business activity.